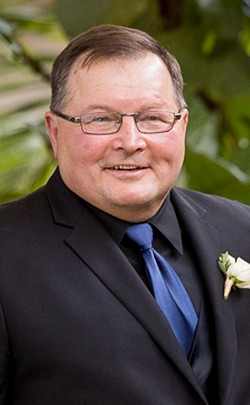 WILLIAM “BILLY” CHODYKA, of Coaldale, beloved husband of Barb Ennis, passed away peacefully at home after a short battle with cancer on Wednesday, March 16, 2022, at the age of 62 years.

Billy enjoyed the outdoors and was often found hunting, camping, or sledding with family and friends in the Crowsnest Pass or in Sicamous, BC. In 1996, Billy met the love of his life Barb, and life changed dramatically for him. He became a much-loved father to three children who grew to love him deeply. Together, Billy and Barb lived life fully enjoying family camping trips, going to concerts, dancing, sledding, and hosting family and friend get togethers in their home. Billy especially loved spending time with his four grandchildren. His children and grandchildren brought him so much joy. Billy was a loving man with a big heart. It showed throughout his life teaching his kids many life skills, including how to fix almost anything, in the bush, with a rock and a stick. His big heart was even more apparent while watching him with his grandchildren. He loved teaching them the basics-shooting BB guns, riding bikes, dirt bikes, quads, and how to fix anything electronically or mechanically powered.

Billy was predeceased by his mother Nadia Chodyka and his father George (Sr) Chodyka, as well as two sisters Val Rowley and Vera Chodyka. He is survived by his loving wife Barbara Ennis, his children Kelli-Rae Tamaki (Tim), Christopher Ennis (Rebecca) and their children Rylen and Chloe, and Colin Ennis (Marissa) and their children Sophia and Scarlet.

A Celebration of Billy’s Life will be held at CORNERSTONE FUNERAL HOME, 2825 – 32 Street South, Lethbridge, AB, on Monday, March 21, 2022 at 12:00 P.M. with Patrick Siedlecki officiating. The service will be livestreamed and may be accessed via Billy’s obituary on the Cornerstone website.

In lieu of flowers, donations may be made in Billy’s name to Big Brothers Big Sisters of Lethbridge & District lethbridge.bigbrothersbigsisters.ca/donate/