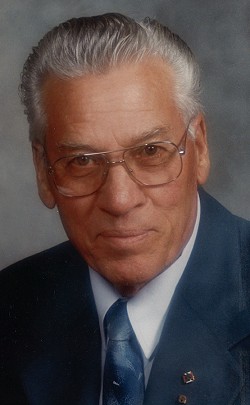 LUCIANO COSLOVI, of Lethbridge, beloved husband of Lidia Coslovi for 74 years, passed away peacefully at Extendicare on Saturday May 14th at the age of 92 years.

Born in 1930 in Capodistria Italy, now Slovenia, Luciano came to Canada in 1957 with his wife Lidia and their son Giuliano.

Upon arriving in Canada, Luciano worked and lived on a farm before settling in Lethbridge. He began a career with Canadian Natural Gas in 1961, went full time in 1967 and retired in 1990. His job took him all over southern Alberta and if you ever rode with him on the highway, he would often say I worked on a gas line there or at a farmhouse there. It seemed like there was no place he hadn’t been before.

Luciano worked hard to improve his English to allow him to pursue a full-time position with the gas company instead of being seasonal. His hard work paid off, rewarding him with a full-time position. Luciano worked his way up to becoming a locator and having his own truck. Those who knew Luciano knew he was a very hard worker and proud of doing a good job. He was proud of his award for 20 years accident-free driving.

Being outdoors and in the mountains was a happy place for Luciano and Lidia and many weekends were spent camping and fishing for trout at Beaver Mines and Police Lake with their grandson and friends. He had a few good bear stories from stealing wine to a giant tooth mark left in the not so tasty soap. They eventually desired a spot to call their own and purchased an acreage at Duck Lake in 1981, building a log cabin and drilling a well for running water. Luciano and Lidia forged many lifetime friendships with those who also loved going to Duck Lake and enjoyed a good meal, laughter, and of course homemade wine.

Luciano was an active and proud member of the Knights of Columbus joining their ranks in 1996 and receiving a LIFE MEMBERSHIP in November of 2021. He served many breakfasts in the basement of St. Patrick’s church where he was also a long-time member.

Luciano is survived by his wife Lidia, son Giuliano (Dawna) their son Dean. Also fondly remembered by his grandson Jade and his daughter Sara.

A Funeral Mass will be held at OUR LADY OF THE ASSUMPTION CATHOLIC CHURCH, 2405 12th Avenue South, Lethbridge, AB on Saturday, May 28th, 2022, at 10:00 AM with Father Derek Remus celebrating.

Memorial tributes may be made to a charity of one’s choice.