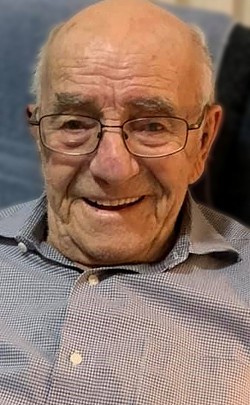 WILLIAM “BILL” KENNETH DAVIDSON, of Lethbridge, passed away peacefully at the Chinook Regional Hospital with his daughter Charleen by his side, in the early morning hours of Monday, December 27, 2021 at the age of 90 years.

Bill was born in Moose Jaw, Saskatchewan on April 3, 1931. As the eldest child of eight, Bill had to leave school in the eighth grade to work on the family farm. This did not stop his lifelong desire to learn. Bill was a prolific reader who enjoyed books right to the end of his life. A self-educated man, he could discuss any subject with anyone. Although he rarely said so, he was tremendously proud of the accomplishments of his children, especially their academic achievements.

Bill spent the bulk of his life in Alberta, where he worked a variety of jobs, including farming and truck driving. He finished his working life as a mechanic with Tollestrup Construction in Lethbridge in the mid-1980s. Bill stayed active in his retirement and took up golf (albeit briefly) and bowling. He also volunteered frequently at Winners Bingo and both the Nord-bridge and Lethbridge Seniors Citizens Centres. Many will remember Bill as the van driver transporting the Seniors’ members to the Centres and on various outings over the years. Bill was a great dancer, a charmer, and a quick wit.

In his final years, Bill lived at Golden Acres Lodge, where he kept the staff and his fellow residents on their toes – he was never in too much of a rush to stop and flirt with a lady (or all of them) or challenge a fellow to a boxing match. Bill married Margaret Duncan in 1960, and although the marriage ended in divorce, they had five children: Russell, Stuart (Judy), Matthew (Kimberly), Colleen, and Charleen (Christopher).

Bill is survived by all of his children as well as four grandchildren: Ryan (Marlena), Lindsay, Ian, and Mateo. He is also survived by his sisters Rita and Ruth and his brothers Ralph (Linda), Roy, and Ray, as well as several nieces and nephews.

He is predeceased by his parents Carl and Gertrude; by two siblings, Joyce and Donald; and by his long-time companion Marie Saito. Bill was so loved and he will be tremendously missed.

The family extends its gratitude to Dr. Amatto for always going above and beyond to ensure Bill’s continued good health, and all of the staff at Golden Acres Lodge for the wonderful care and warm friendship extended to Bill.

A Celebration of Bill’s Life will be held at CORNERSTONE FUNERAL HOME, 2825 – 32 Street South, Lethbridge, AB, on Saturday, June 18, 2022 at 11:00 A.M. The service will be livestreamed and may be accessed via Bill’s obituary on the Cornerstone website. Following the service, a light lunch will be served.

In lieu of flowers, please consider a donation to the Community Foundation of Lethbridge and Southwestern Alberta (cflsa.ca) or Nord-bridge Seniors Centre (etransfer available to friendly@nordbridgeseniors.com)