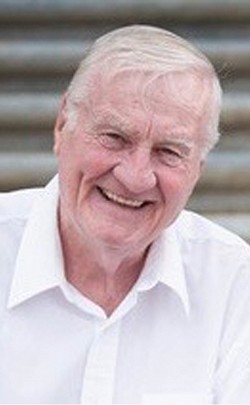 DWIGHT WILLIAM DOMBOWSKY, beloved husband of Barb Dombowsky of Lethbridge, passed away in the St. Michael's Health Centre, Palliative Care Unit on Thursday, February 10, 2022 at the age of 77 years.

Besides his wife, he is lovingly remembered by his daughter, Carrie (Michael) and their children, Jordyn (Riley) and Connor of Lethbridge and step-grandchildren, Alexcia of Kelowna BC, Demitri of Regina, Sask. and Kaylena of Fernie BC; son Rob (Joanna) and their children Miya and Matthew of Lethbridge, as well as brothers, Jerry, John, Kenny and Joe.

Dwight was predeceased by his parents, Pete and Nellie Dombowsky and his sister, Bev.

Dwight grew up with his four brothers on a farm in Avonlea, Sask. He left at an early age to attend Notre Dame College in Wilcox, Sask. to follow his dream of playing hockey. Dwight would spend hours sharing stories with family about his experiences and the characters he met along the way. As a older adult, he joined the Oldtimer's Hockey League and continued playing for many years.

Following Notre Dame, Dwight attended the University of Regina and earned his Bachelor of Social Work Degree. He had a deep compassion for people and began his social work career at Paul Dojack Youth Centre in Regina. Dwight loved his role and having the ability to shape the minds of the youth he worked with.

No matter where Dwight's career path took him, he was consistently standing up for the underdog. He liked to push the boundaries and always did it in the best interest of the disadvantaged. Dwight saw the best in everyone and would give a stranger the shirt off his back. He built a strong career working for the Provincial Government in Lethbridge, developing programs that served the handicapped. One of Dwight's proudest achievements was in developing a number of these programs throughout southern Alberta. When he finally retired, he left an immeasurable legacy behind.

Dwight spent his final years traveling the world with his loving wife Barb, spending time in Taiwan with his son and Joanna’s family, playing golf with his friends, puttering around his workshop and creating a beautiful camping space out at Payne Lake for him and Barb to enjoy. However his biggest love were his grandchildren and spending as much time as he could influencing them in a positive way.

Dwight was a light in the world and he never really knew it until recently. His laughter and big personality have left imprints on our hearts.

Until we meet again.

Thank you to everyone who has supported the family during this difficult time. There will be a celebration of his life in the summer.