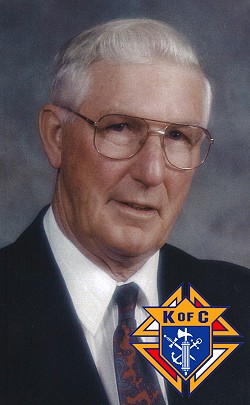 PATRICK FRANCIS DOYLE of Lethbridge beloved husband of Lorine Doyle passed away peacefully at the Lethbridge Regional Hospital on Friday, May 20th at the age of 92.

He was pre-deceased by his brother Joseph Doyle, and brother-in-laws; Leo Bourassa, Albert Heal, and Larry Spring.

Francis was born in Fort Macleod on January 18, 1930 to Patrick and Jennie Doyle. He was raised on the family   Homestead in the Waterton District, 15 miles south of Fort Macleod. He attended the following schools: Allenfields, Waterton, and Fort Macleod.

In 1947, Francis attended S.A.I.T. IN Calgary to study Agriculture Mechanics.While at S.A.I.T. He met his future wife, Lorine Kneiss. On July 19,1952 they were married at Fort Macleod Holy Cross Parish.They built a small house adjacent to his parents.

Francis farmed and ranched until retirement in 1995.They sold the family farm and moved to Lethbridge where they resided until his passing.

He played on the South Macleod Hockey Team, curled, and played Slow Pitch.

He was a chartered member of The Knights of Columbus Father McGillivary Council.

He was a devoted husband, father, and grandfather. He will be sadly missed by his family and lovingly remembered by all who knew him.

The family would like to thank the staff on 4B at The Chinook Regional Hospital for their exceptional care and compassion.

A Prayer Service will be held at CORNERSTONE FUNERAL HOME, 2825 32nd Street South, Lethbridge, AB on Wednesday, May 25th at 7:00 P.M. with Sharon Hagel, officiating.