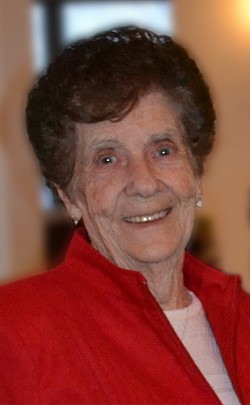 JOAN EMERSON, beloved wife of Robert (Bob) Emerson of Lethbridge passed away peacefully at the Chinook Regional Hospital on Tuesday, February 1, 2022 at the age of 86 years.

Born to John and Margaret Martin on June 11,1935, Joan lived her entire life in Lethbridge. She grew up surrounded by her six siblings. Joan married her husband Bob on June 4, 1955 and together they raised their four sons.

Joan was her boys’ number one fan, always there to cheer them on and support them in their various endeavours. She loved spending time with her grandchildren and later was delighted when great-grandchildren came along. She was fond of all the family dogs.

Over the years Joan volunteered at local events such as the Moonlight Run and Dragon Boat Races. She enjoyed meeting with friends and family for coffee and gardening in the yard with Bob.

Joan was a loving wife, mom, grandma and great-grandma who will be dearly missed.

In keeping with Joan’s wishes a private family gathering will be held at a later date.

Flowers are gratefully declined. Should you wish to honour Joan’s memory, donations may be made to a charity of your choice.