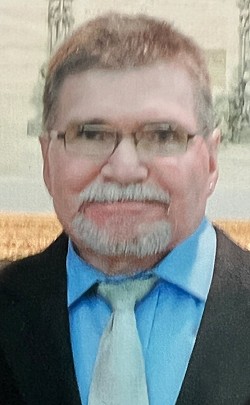 It is with heavy hearts that the family of DANIEL KEITH JAMES announce his passing on Sunday, July 17, 2022 at St. Michael’s Palliative Care Unit at the age of 65. He was surrounded by his family.

The most important thing to Dan in his life was family. He will be lovingly remembered by his sisters, Deb Mousseau and Joan Fortin; his nieces, Amey Whalen and Jennifer Kehoe; his great-niece, Haley Brown; his nephews Troy Whalen and Scott Leusink, and his brothers-in-law, Marc Mousseau and Pierre Fortin. He was predeceased by his father and mother, William and Ruth James, and his sister, Cathy James.

Dan was the only son and brother of his family. He was born in Orillia, Ont. and was the second born. He had to put up with three sisters. Dan lived with his parents most of his life in Ontario, but moved to Alberta in August 2011 after his parents’ deaths.

The Royal Canadian Legion and the Odd Fellows Lodge were Dan’s place to show his passion. He had almost 50 years of service with the Royal Canadian Legion as an Associate Member and nine years of service with the Odd Fellows. He loved baseball and hockey. The Toronto Blue Jays and Toronto Maple Leafs were his teams and he rarely missed watching a game. He also enjoyed family times at the ball diamonds, going to movies, travelling, and guys’ nights with his nephew Troy. He enjoyed going camping with Amey and Troy, fishing and golfing.

In lieu of flowers, any donations may go to the Heart Function Clinic, care of the Chinook Regional Hospital Foundation: 960 - 19 St. S, Lethbridge, Alta. T1J 1W5. Dan’s next-of-kin will receive acknowledgment and they will be provided with a list of names of all people who donated in Dan’s memory.