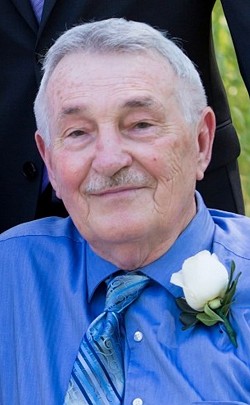 HENRY OSKAR MOSER, beloved husband of Tammy Moser, passed away peacefully at his home in Coaldale on Thursday, June 30th, 2022, at the age of 82 years.

Henry was born in Kippenheim, Germany on December 27, 1939, and moved to Canada with his family in his teens.  He met his first wife, Eleanor, in St. Thomas, Ontario and moved his family out to North Vancouver, where he was a journeyman lithographer. Following his entrepreneurial spirit, he moved with his young family to Kelowna where he owned his own store, O’Henry’s Hobbies & Games.  He also worked in aerial photography for many years before moving to Parksville, BC to pursue his true passion, the RV business. The family moved once again, this time to Alberta, where he became a sales manager at Scamper Canada. From there, he owned his own RV business, Henry Moser RV, until he was no longer able to maintain the business due to his health.

Henry had many passions. He was an artist, played many musical instruments, coached and played hockey, and was a diehard Toronto Maple Leaf’s fan.  He could be seen on weekends watching his horse race at the Lethbridge Racetrack. He also enjoyed watching his grandkids in their sporting events.

Henry lost his first wife Eleanor Moser in 2009, which was a very difficult time for him. He was very fortunate to find love again with Tammy, whom he later married, and enjoyed many adventures and trips with.  Along with his wife Tammy, Henry is survived by his children Helen (Murray) Reynolds and Brian (Erin) Moser; step-son Landon Skiba; grandchildren Mackenzie, Brianne Meheden (Eric), Aidan, Brooke and Kale, and one great-grandchild, Grayson. He is also survived by his sister Hanna (Al) Melito.

He was predeceased by his mother Margaret Schwarz, and sister Gabe Vronsky.