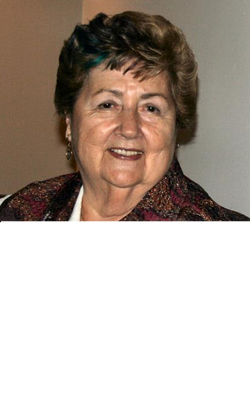 JENNIE OLEKSY (née Filuk), of Lethbridge, beloved wife of the late William “Bill” Oleksy, passed away peacefully at the Chinook Regional Hospital, on Tuesday, April 26, 2022 at the age of 91 years.

Jennie was born in Minitonas, Manitoba on February 11, 1931. Shortly after, her family moved to a farm in Swan River, Manitoba. She grew up with 14 siblings - nine brothers and five sisters (one sister was her twin), with many wonderful memories of life with them on the farm. She went to a country school (Lancaster) for her elementary school education from Grades one to nine. She attended Swan River High School for Grades 10 to 12. Upon graduation at the age of 17, she taught in a one-room country school.

In 1949-50, she attended Central Normal School in Winnipeg, then taught in various country and town schools in the Swan Valley Region.

She met her husband, Bill Oleksy, while walking on her way to Central Normal School - he was a school teacher as well. They married in 1954. While living in Swan River (first in town and then on a farm), they had three children, Brent, Brenda and Barton.

In 1967, she and Bill moved their family to Lethbridge. The house they bought had a kindergarten in the basement, and so Jennie’s career as the best kindergarten teacher in Lethbridge began - her first year included Barton!

Teaching full-time and raising three children wasn’t enough - Jennie decided to earn her Bachelor of Education Degree and Early Childhood Diploma at the University of Lethbridge - studying nights and weekends. Upon receiving her degree, she moved her kindergarten to Park Meadows Elementary School, and taught until her retirement in 1993. She was well loved by all her students. Even after her stroke in 2010, she could recognize and name grown adults from the five-year-olds she taught, as well as their parents and siblings.

Jennie and Bill traveled extensively, including Hawaii, Australia, New Zealand and a driving trip to Canada’s East Coast, as well as many trips to BC to visit family.

She enjoyed playing and watching golf - Rory McIlroy was her current favorite. In football, she cheered for the Winnipeg Blue Bombers and, most recently in hockey, Connor McDavid.

Puzzles were a favourite pastime, and she enjoyed gardening and getting her kids to pull weeds.

Jennie is survived by her children and their families: son Brent (Jamie) Oleksy, Rick (Freya), Jody (Craig), Tesla, Nolan and Calder; daughter Brenda (Bob) O’Reilly, Chase; and son Barton Oleksy (Criselda Mierau), Katya Mierau, as well as her brothers, Tim, Wally (Priscilla) and Harvey (Alice), her sisters Ruth (Bill), Anne and Olga (her twin), and many, many nieces and nephews.

A Celebration of Jennie’s Life will be held at FIRST BAPTIST CHURCH, 1614 – 5 Avenue South, Lethbridge, AB, on Saturday, July 2, 2022, commencing at 11:00 A.M with Dr. Bruce Martin officiating. All are welcome. For those unable to join in person, the service will be livestreamed and may be accessed via Jennie’s obituary on the Cornerstone website.