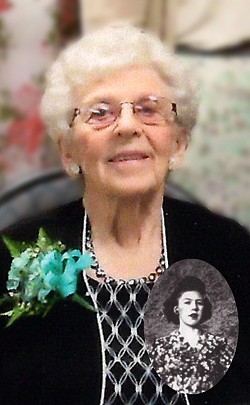 EVELYN EMMA PICKERING, beloved wife of the late Irvine Pickering, passed away peacefully at St. Michael’s Health Centre, on Sunday, April 24, 2022 at the age of 93 years.

Besides her loving husband Irvine, she was predeceased by her son James and son-in-law Frank Fudra. Evelyn has two siblings left, Robert and Leroy Conine. Her other three brothers and three sisters have gone to heaven ahead of her, as well as her parents, Walter and Elizabeth Conine.

Evelyn was born at Heatherdown, Alberta, a little town close to Stoney Plain. She and her family had to endure the next step to move to Lethbridge. Evelyn came to Lethbridge with her family in the spring of 1942. They slept in the back of a truck until they got to her Auntie Emma’s house. Then they rented a house at the river bottom, known as Indian Battle Park (Fort Whoop-Up).

Evelyn walked to the Bowman School in Lethbridge. Later on, she worked at the Lethbridge Laundry and Parks Dry Cleaning. On August 23, 1943, she met Irvine at Trianon Ball Room dance and fell in love. They were engaged on November 24, 1944, and marriage followed on May 4, 1946. Together, Evelyn and Irvine farmed and raised five children north of Coaldale, AB.

In September 1999, they retired in Lethbridge. Evelyn worked on the farm all the time, combining, cultivating, hoeing sugar beets and irrigating the crops. She also did the bookkeeping, raised an organic garden, baking, cooking and canning. She cooked many family dinners for everyone. Evelyn was the kindest, most helpful person you could know.

Later on, Evelyn and Irvine went to Fairmont Extendicare. Evelyn kept busy, watering the flowers and was a volunteer on committees. She kept busy at St. Michael’s Long Term Care, making lunches for children, playing BINGO, playing cards, and colouring and painting. She even wrote a book at 87 years old!

Evelyn was the strongest, wisest extraordinary lady for her time! But most of all, she loved her family, grandchildren and great-grandchildren to the moon and stars and back!

We would like to thank the staff at St. Michael’s Long Term Care for all they did for Evelyn and their compassion.

Evelyn will be laid to rest during a private Graveside Service with her beloved husband Irvine in Mountain View Cemetery.