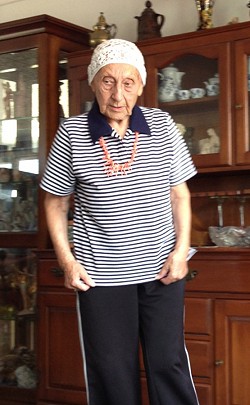 Our dear mother, Elisabeth was born in Nuremberg, Germany on March 11, 1925.

As a child, she endured the ravages of World War 2.  The food ration for one person in Germany at that harsh time was one pound of meat per month.  War was severe in Germany and Nuremberg was one of the most heavily carpet-bombed cities of the Second War.  She later said that not one brick was attached to another after these raids.  She and her husband, our late father, Arvid (whom she married in 1950) both believed that Germany would never be rebuilt.  So they emigrated to Canada, the Land of the Maple Leaf.  Arvid went ahead, in November, 1951, with 21 dollars to his name, got a job at St. Mary's Hospital in Montreal and in 4 months saved enough to send for her and their 6 month old baby.

Elisabeth was one of the kindest people you would ever meet.  One day, when asked why she never swatted even flies or spiders, she said, "No.  I always let them outside.  It's not much of a life, but it's all he has."

And once when she was asked if she talked to her plants because they were so healthy, she said, "Yes.  I place one hand below a leaf, and the other above and hold it gently.  I tell the plant, "You are a good plant and I love you.  And you don't have to worry, for I will take care of you for the rest of your life.  I will put you outside when it rains and you can wash your leaves.  I will bring you in when it's cold, let you stand in the sun and keep you warm at night.  And I will care for you forever and I love you".

Mum was 97 on the outside, and 5 on the inside when she flew from our world in God's Hands.