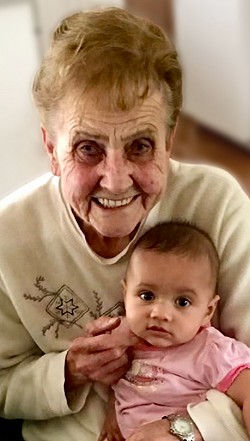 JACQUELINE “JACKIE” SKIBA passed away peacefully over the Holidays at the Cedar Creek Care Home in Lethbridge at the age of 90 years.

She will be dearly missed by three sons, Fred (Louise), Wesley (Ledean), Randy (Lizanne) and eight grandchildren: Aaron, Katina, Loren, Coral, Paige, Reed, Sarika, and Torryn, as well as many other friends and family. She was predeceased by her husband John, son Chris Pearson, brother Frederick, and sister Marnie.

Jackie was born in Lethbridge to Kate (Dorchak) and Fritz Russenberg. Tragedy struck early in life with the loss of her brother to meningitis and then again, when Fritz died in a plane crash shortly after. Jackie grew up mostly in Lethbridge and formed several friendships in her teen years that would last a lifetime.

She graduated from Garbutt Business College in Lethbridge and started work as an administrative assistant. She worked in law firms in Lethbridge and Calgary. Early on, she was by herself with her first two boys, Chris and Fred. Even so, she still thrived in the man’s world of the 1950’s and was very proud of this.

In January 1963, she married her second husband, John, who had a farm near Lethbridge. Life on a farm was something that just felt right, a feeling that persisted for the rest of her life, even long after retiring and moving into the city.

Life on the farm was busy with two more sons, Wes and Randy. She was not afraid of hard work on the farm, but she continued to work in admin jobs in Lethbridge. She enjoyed her work, and told people the money was nice for some extras around the house. In truth, much of the money was used to help her four sons for their extras, and well-being. For them, there was no sacrifice too great. Her final and favourite job was at the Lethbridge Community College.

As the grandchildren came, nothing was more cherished than a chance to spend time with them; she would drop everything for even the smallest moment. Family was always the priority. She was always the one to say “don’t worry about me, what can I do to help you?” Jackie was always one to try to help out other people but most of all, family.

Jackie enjoyed great vitality into her senior years. She rode a mountain bike into her late 60s.  She took up golf in her 50s and played into her 70s, wielding a Big Bertha driver. She was on a bowling team until she was 80. Contemporary pop music was played loud on her stereo from the time when music was only sold on vinyl records. If you knocked on the door, even when she was 85, you might have thought you were stepping into a rock concert. And for all her senior years, she greatly enjoyed her friends and family.

Her final few years were spent with some serious health challenges, but even then, she could most always find a smile. The family would like to thank the staff at the Cedar Creek Adaptacare in Lethbridge.

A Celebration of Life is planned for April but a date is not finalized. The date will be posted on Cornerstone's website.