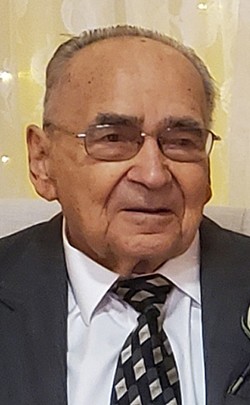 It is with profound sadness that we announce the passing of our loving husband, father, grandfather “Gigi” & great-grandfather, PETER COMA, on Sunday, January 30, 2022 at the age of 90.

Peter was born, on March 7, 1931, & raised on the family farm in Winnipegosis, MB. When he was 16, he left home to pursue a career as an auto body technician, which he did for 27 years. On June 25, 1956, he married the love of his life, Ann Sass. In 1962 they purchased a hotel in Pelly, SK which they operated until 1974 when they moved to Lethbridge. Until his retirement in 1998, they owned & operated 4 dry cleaning stores.

They enjoyed travelling near & far, golfing, camping & fishing. Peter was a devote Catholic & a 4th degree member of the Knights of Columbus. He loved spending time with family & friends & together with Ann, they were fantastic hosts to many guests over the years. As their “Gigi”, his greatest joy was watching his grandchildren grow & he attended as many of their activities as he could. He was thrilled to welcome his great granddaughter, Scarlett, last year.

A private family funeral service will be held on Saturday, February 5. Interment to follow at Mountain View Cemetery. Memorial donations may be made to the Canadian Cancer Society or Kidney Foundation of Canada or any charity of your choice.