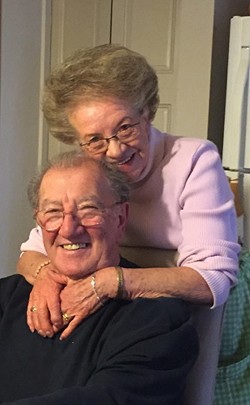 JOSEPH DI SABATO, the beloved husband to Grace Marie Di Sabato, passed away at the Chinook Regional Hospital in Lethbridge on Friday, February 18th, 2022, at the age of 82 years.

Dad immigrated to Canada in 1954 with his parents from Compobasso, Italy at the age of 16.  He attended school until grade 8.  As he grew older, he played soccer in a men's league.  He was employed at Catelli’s factory in Lethbridge but had to leave due to an allergy.  He went to college and took a mixology course and became a bartender at the local army and navy, then the Lethbridge Lodge (Essie’s), until he retired after 20 years.  He was a devout Catholic and meditated in prayer two hours a day.  Family, grandchildren, great-grandchildren, fishing, gardening, making homemade wine were passions in his life.  He will truly be missed.

A Funeral Mass will be held at OUR LADY OF THE ASSUMPTION CATHOLIC CHURCH, 2405 – 12 Avenue South, Lethbridge, on Thursday, February 24th, at 2:00 P.M., with Fr. Kevin Tumback, Celebrant.  Interment will follow in the Royal View Cemetery.

In lieu of flowers and in memory of Joseph, donations may be made to the Canadian Cancer Society (cancer.ca)