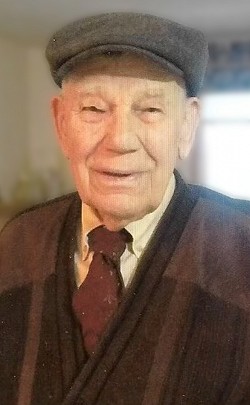 The family of HENRY JOHN DICK of Lethbridge sadly announce Henry's peaceful passing at Legacy Lodge on Sunday, March 20, 2022, with his beloved Leona at his side and wrapped in the love of his family.

Henry was born to his Russian Mennonite parents, John and Agnes Dick, on June 17 1922 in Orenburg, Russia. In 1926, they embarked on a perilous emigration journey that brought them first to Whitewater Manitoba, and then to Southern Alberta, where the family set down their roots.

Henry was a patriot. He loved his country and the freedoms and opportunities it provided. He served with the Royal Canadian Army from December 1942-January 1946 and saw active duty in the North Pacific on the Aleutian Island of Kiska. This forever changed his life, as it was there that he committed his life to his Lord and Savior, Jesus Christ.

Henry and Leona (Klassen) met in their Young People's church group, and were married on December 28, 1944 in the Vauxhall Mennonite Church. It was a beautiful, sustaining relationship that only grew stronger and more loving over the 77 years that they shared. Henry adored Leona - she was the love of his life.

In 1952, Henry and Leona settled on their new irrigation farm in Hays, where they raised their family of five children; 3 sons - Ron (Linda), Allan (Anne Mundt) and Wayne, and two daughters - Wendy Timmermans and Barb (Rod Lanser).

Henry's creed was "Love the Lord your God with your heart, mind and soul, and your neighbor as yourself", and was highly respected as a man of integrity. He and Leona were strongly committed to their church and community. Henry was also involved in many community endeavors, including the early 4-H movement in Hays, the Bow River Gas Co-op and the Bow River Irrigation District, to name but a few.

In 1988, Henry and Leona retired to Lethbridge, where they became active in the Lethbridge Mennonite Church. Retiring only meant moving off the farm, as Henry quickly immersed himself in volunteerism. He was the chair of the Lethbridge Senior Citizen Organization, spent countless hours at the Soup Kitchen, was a compassionate care visitor at St. Michael's, and represented less fortunate individuals as a social advocate.

Over the years, Henry and Leona developed many rich friendships and their loving family expanded to include 16 cherished grandchildren, 26 great grand children, and 1 great great grandchild. Henry is also survived by his two sisters - Jessie Goerzen and Peggy Duby, and several nieces and nephews. He was predeceased by son-in-law John Timmermans, daughter-in-law Sue Dick, his parents and his sister Agnes and brother John.

Thank you to everyone who has so enriched the lives of Henry and Leona with your love and support over the years. Thank you to our church and extended family.

We especially wish to thank everyone at Elim Village and at Legacy Lodge for their friendship and care of Henry and Leona over the past few years. You provided so much comfort, stability and security to them.

To Lethbridge Home Care Nursing staff who cared for Henry both at Elim and at Legacy, and Legacy Lodge staff – we will be forever grateful for the care you provided to Henry, for your kindness, compassion and friendship you exhibited, especially in the final weeks of his life.

Family was very important to Henry, and over the years, there were many celebrations. The final celebration of Henry’s life will be held at CORNERSTONE FUNERAL HOME, 2825 – 32 Street South, Lethbridge, AB, with a Viewing on Tuesday, April 5, 2022 from 2:00 P.M. to 4:00 P.M. and a Funeral Service on Wednesday, April 6, 2022 at 10:30 A.M. with Pastor Ryan Dueck officiating. The service will be livestreamed and may be accessed via Henry’s obituary on the Cornerstone website.

Henry will be laid to rest in Vauxhall Mennonite Cemetery.