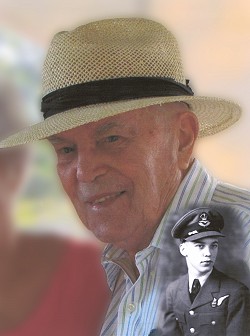 12 April 1925 – 19 November 2021 - It is with gratitude for a life well lived and a man much loved that we announce the peaceful passing of JAMES GORDON (JIM) DOYLE on November 19.

He was born on Easter Sunday, April 12, 1925 in New Westminster, B.C. and grew up there. World War II was raging so on his 18th birthday he joined the RCAF, graduated with the rank of Pilot Officer, and served in England. Following V.E. Day, he volunteered for service in the South Pacific. Promoted to Flying Officer, he was on leave before reporting for duty when the atomic bomb brought the war to a sudden end. Dad had thrived on his years in the air force. On discharge he returned to New Westminster where, in July 1946, he married his childhood sweetheart, Marion Broder.  Two years later, they moved to Lethbridge where they spent the rest of their lives.

Second only to his love of Marion and their family, was his love of flying. In the next 60 years, he logged over 5,000 hours as a private pilot, covering the continent from Inuvik to Mexico. He served on the executive of many Alberta flying organizations including the Alberta Aviation Council, the Lethbridge Flying Club, the Alberta Flying Farmers and as Commander of the Southern Zone of Alberta Search and Rescue. He retained his amateur radio operator's license (VE6AJ), enjoyed hunting, and spent many happy hours skiing with his family.

During the 1950’s and 1960’s, he was Operations Manager of Broder Canning Co. in Lethbridge. He then farmed near Broxburn for ten years where he raised prize Angus cattle.  Dad and Mom retired to an acreage close to the city of Lethbridge which they aptly named Windmeadows. They now had time to travel so part of most winters were spent in Hawaii, the Caribbean, or cruising with their family.

Both Dad and Mom spent their last years quietly enjoying their Windmeadows home and its peaceful setting. With their local great-grandchildren often providing company, Dad and Mom enjoyed puttering around the farm and the extensive flower gardens. They so often said “It's been a wonderful life.”

The family wishes to express their deepest appreciate to the doctors and health care workers who provided such excellent care in his final days.

The pandemic has forced any celebration of Dad's life to be indefinitely postponed.