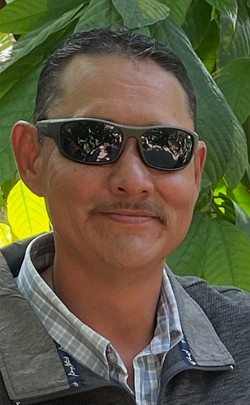 I heard the voice of Creator say, come now and follow me. I will carry your heavy load, today. Yes, I set you free to be with your Ancestors in the Spirit World, where you will carry on with your Spiritual Work.

KENNETH ROYCE KERRY MANY FINGERS (Naatowo’tako - Walking Around Holy), started his Spiritual journey home on July 29, 2022, at the age of 49 years old. He passed on at the Fort Macleod Hospital. Ken will leave a legacy of memories that the family will cherish forever: His smile, laughter, humbleness, respect, but most of all his love for his wife Patsy, whom he shared 23 years of marriage. Sons: Ky, Dustin and Kennedy, His Mother Jennifer, Father Kerry Scott his extended family.

Ken was a well-respected Blackfoot Healer and Herbalist; He will be greatly missed by all that knew him. Although his humble journey here in this world was short, Ken sacrificed much of his life by helping many family and friends that approached him for healing, guidance and prayers. As a youngster, Ken excelled in all sports including; football, baseball, cow riding and hockey in which he represented the AAA Val Matteotti Golden Hawks earning the name Sapaatsta “Scorer”. He passed on his athletic abilities to his son, namely Ky who is currently excelling in Hockey, Baseball and Golf, Ken was so proud of his pride and joy his son Ky with his recent accomplishments in the sport of golf this past three weekends in Fort Saskatchewan, Alta. placing second with seven other Blood Tribe Members, Nanton, Alta., placing second with his bros Colton, Tailyn Devine, and Peyton White Quills and Piikani Golf Tourney which was held at Paradise Canyon in Lethbridge, Alta., placing first with his bro Dalton Eagle Bear. Ken spent much of his younger life with his Grandpa Floyd tending to cattle and horses on the Many Fingers Ranch. Ken was introduced to TikTok by his sister-in-law Rosella Doore and spent his whole evenings on his rocking chair sharing with his friends and his wife by saying, “This is you.” To the point his wife wouldn’t open them she would just delete. Ken was a perfectionist, and overachiever in everything he committed to and it was not unusual to find him working on a new project for hours at a time in order to achieve his high standards. This work ethic and diligence would be reflected in his work as the role of Program Supervisor for the Kainai Peace Making Program, a position that he had held since October 2020. Ken had an extensive work history, starting work at a very young age. In May 2021, Ken became a University of Lethbridge Alumni attaining a Bachelor of Health Sciences and achieved the overall highest GPA in the Addictions Counselling Program. He would begin to complete yet another educational endeavor in September 2022, as Ken was set to begin his Master’s degree at the University of Lethbridge. However, his true calling in life came in the form of serving Iihtsi paitapiiyio’p “Creator,” with teachings shared by his teachers and fellow knowledge keepers: Andrew Small Legs, George Goodstriker, Rufus Goodstriker, Calvin Williams, Mickey Smith, Addison Crow, Randy McHugh, Peter Big Stone, Lynn Johansson, Jo Eagle Tail Feathers, Trevor Prairie Chicken, Brian Smith, Bradley, Gratton and Kevin Mountain Horse. Ken was apprenticing his cousin Joe Many Fingers (Maistoikimaan) to continue his Spiritual Knowledge and Ceremonies. Ken utilized his knowledge to assist anyone who needed guidance and healing and would never turn anyone away who sought his help. Ken’s passing is a huge loss to his wife, sons, mother, father and all those that he served and sacrificed for and will leave an empty place in the hearts of the many that loved him, including his fur babies Cinnamon (his cat), Cooper and Chewy (his dogs).

The Family requested not to specify honourary pallbearers, as there were far too many individuals that Ken loved dearly on his journey, and we apologize for any names that may not have been mentioned.

Following the service, Ken will be laid to rest in the Many Fingers Family Plot.