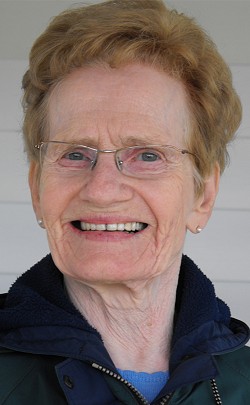 With immense sorrow but gentle relief, we announce the peaceful passing of our mother, grandmother and great-grandmother, IRENE PARKER (nee Greenslade) of Lethbridge, AB, beloved wife of the late Thomas “Tom” Maxwell Parker, at Legacy Lodge at the grand age of 95 years.

Irene was born on July 14, 1926, in Hanna, AB with her twin brother Ivor and was the only girl raised with her large family in Roselynn, AB. Life was hard on the prairie in those early years where their family survived on farming and selling produce from their market garden. The family would see six brothers sign up and serve in WWII with RAF pilot Roy the only one not to make it home after being shot down over southern Holland in 1942. Their family suffered the loss of brother Billy in a farm accident then her mother passed away, also in 1942. Irene was left to help her father care for her younger brothers until graduation from high school, when she started working at the RBC in Hanna.

In 1945 her best friend Carrie introduced her to her brother, Tom Parker, who had just returned from serving in wartime Europe. Love bloomed and they were married in August of 1946. Unfortunately, with bank rules of the day, she had to resign from her job after she married. Jerry was born, and in 1949, they made their way to join other Parker family on the Alaska Hwy. at Fort Nelson, BC where jobs were plenty. Les was born and by this time, Tom and Irene had established themselves owning service stations with cafés that she managed. After Trish was born, and once they sold the Esso service station, Irene worked as a postal clerk for a short time then as a bookkeeper for brother-in-law, Frank Dolan. In the 70s she worked in the finance office of the Fort Nelson General Hospital until she retired in 1988. They lived on a few properties over the years but eventually built their home on an acreage where they raised horses and occasionally chickens, ducks and geese.

After Tom and Irene retired, they fulfilled her desire to move south and to the milder climate of the Southern Okanagan (Oliver, Penticton and Vernon) where they enjoyed all that life had to offer in warm summers, mild winters, golf and an abundance of fruit and vegetables.

After almost six years in Vernon and due to Tom’s health, they moved to Lethbridge to be closer to Trish and her family. In the years after Tom’s passing in 2011, Irene enjoyed living at Black Rock Terrace then eventually at Legacy Lodge where she resided until her recent passing.

Irene was very active personally and in the communities she lived. She was a founding and life-time member of the Order of the Royal Purple in Fort Nelson and contributed countless hours for many years to catering events and creating crafts for sales in teas and bazaars. Irene was a legendary ball player on 1st base on their ladies’ teams over the years and loved to curl with her girlfriends in the winters. In her retirement years and everywhere she lived, she enjoyed walking, fitness classes and the many friendships she made. Irene was an active parent member of the Fort Nelson Figure Skating Club in the years Trish skated, supporting all efforts to raise money and produce ice carnivals.

From her years managing the cafes, Irene became an amazing cook and baker and was known within our families for her turkey and roast beef dinners, and delicious homemade dinner and cinnamon buns. Her gardens and flowerbeds on the acreage were luscious and productive and she was kept busy every fall canning, preserving, and picking wild berries.

Those long winter months provided ample opportunity for her many talents in crocheting, hooking rugs, quilting, sewing and whichever craft she took a mind to learn. Irene had always wanted to learn to paint and finally had the opportunity in her time with Recreation Therapy at Legacy Lodge. She also loved playing cards and enjoyed playing “500” with Tom and her Parker in-laws.

Irene enjoyed travelling with our family and friends to many places including Nevada, Mexico, all over BC, Alberta and Saskatchewan, Ontario, the Maritimes, Arizona, California, but especially memorable was their adventure to Holland for the 50th Anniversary of the Liberation celebrations with Tom. There, she was also able to visit the grave of her dear older brother, Roy.

Although admittedly Irene couldn’t carry a tune “to save my soul”, she loved music, thoroughly enjoyed the efforts of others and was an especially good dancer. In her later years, Irene would often clap to music, real or imaginary.

You could always count on Irene to look her best with her hair done and fashionable clothes, especially when she was out of the house. In the remoteness of the north, she made good use of the Sears Catalogue and any opportunity to head to the cities. Irene enjoyed shopping, especially in later years when she could afford nicer things and travelled or lived closer to bigger centres.

Irene loved spending time with our families and was always game for whatever adventure we planned. She lovingly supported her grandchildren in their various sport and musical endeavours.

Irene will be remembered for her beautiful smile and sunny disposition, kind and friendly nature and her generous and forgiving spirit. She had an amazingly long and well-lived life and will be dearly missed.

If desired, donations in memory of Irene would be welcome to her favourite pastimes she enjoyed in recent years, New West Theatre at www.newwesttheatre.com or The Lethbridge Handicapped Riding Association, 24-205015 Hwy 512, Lethbridge County, AB T1J 5N8.

The service will be live-streamed and can be accessed via her obituary on the Cornerstone website.

Irene will be laid to rest with Tom in the military section of Mountain View Cemetery, Lethbridge, AB.