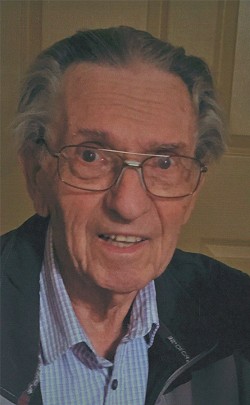 NICOLAAS VISSER, passed away at the Chinook Regional Hospital, on Saturday, January 15, 2022, at the age of 86 years.

He is survived by his children: Dini, Kees and Mary (Paul), grandchildren: April (Brett), Carly (Ken), Ashley, Malcolm and Matthew, as well as great-grandchildren: Elise and Blake.

He is predeceased by the love of his life, Jacoba Visser, parents and brother Cor.

Nick was born in the Netherlands, surviving the starvation of Amsterdam in WWII. Nick met and married Jacoba in Amsterdam. He was a medic in the Dutch Marines and after his service, he and his family immigrated to Canada, choosing Calgary as the city to live in. He found work in the oil industry, graphics and administration.

He enjoyed music and played in a number of orchestral bands. He also joined Jacoba in the Dutch Canadian Choir, singing and managing the group.

He put family first and loved to explore the mountains with his children. Nick and Jacoba moved to Lethbridge to enjoy a quiet retirement. The family wishes to extend thanks to the staff of Edith Cavell Care Centre in Lethbridge.

Per Nick’s wishes, no funeral service will be held. A family gathering will take place at a later date.

In memory of Nick, donations may be made to Veterans Food Bank (theveteransfoodbankofcalgary.ca) or a charity of your choice.